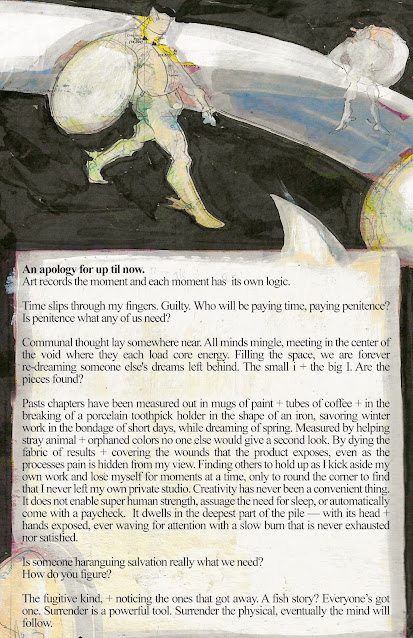 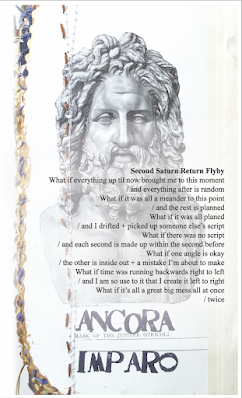 Revisiting - friends come and go, move away, you exit from theirs. Some you barely know - but cant forget them - just walking into a room. Some remain with you your entire life. Others leave from your life, but later come back around again in ways you cant imagine.

Welcome the human condition traveling without a map or controls - the rest is deva vu and cryptomnesia. It’s all we can do.

What I learned today:

• Hand signals are not universal.

• Balancing the act is something we come back to again + again.

• You never know who’s life you are saving with your work, + you may never know.

Meraki Issue #8 is out and about.

To my patrons who make the Meraki Issues project happen.

Thank you for your supporting the art work at hand + my work in particular.

To join others who receive Meraki Issues quarterly,

check into Patreon to see how. 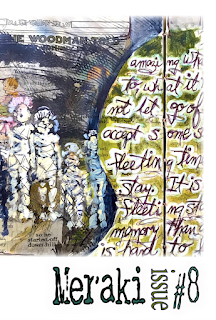 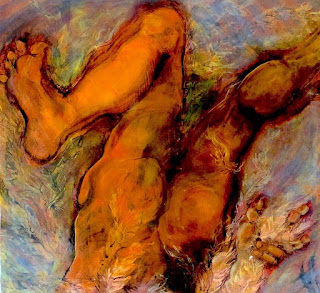 It doesn’t matter what color I put on the brush it seems to come off as putty, French blue or grayed violet. Those are the colors I seems to work with the most at this moment. There must be something missing in my palette as I can mix anything and these three appear. I know color, and it’s not suppose to be this easy. Or so tragic.

If something is so very obvious perhaps it is a truism. But, are all truisms obvious?

What I learned today:

I only make mistakes when I know what I want.

A potential for options at the quantum field is energy + so responding to energy- is bridging the quantum reality as a new normal.

Above: An unfinished reworking of Icarus Descending.

I’m okay with people not knowing my side of the story. I don’t feel like I need to prove anything. But all things being equal …

I just had what I believe to be an identity crisis. Of the worst irrational sorts.

That my entire life had been in-waiting as an imposter. I’m the understudy and the lead has never broken her leg.

But it comes back to me. I made those decisions, every decision. I’m not the forever kind.

So in this morning mopping up after an identity crisis — sadly, all I could think of was to work harder.

I close my eyes + remember I'm inside the human condition.

It does become so much easier to run when we believe something is chasing us. But is that more important than waiting for the present to catch up? I’d Rather hide behind my work than talk about myself.

Foot the bill + then pay for life as a side project.

That side project will be a change of mind on the morrow.

Recently a friend forward this: That's me, below, during art school days. Tied to a NYC bank pillar. Early pirate phase, though I did not know it because the mass pirate phase had not caught up + named it yet. 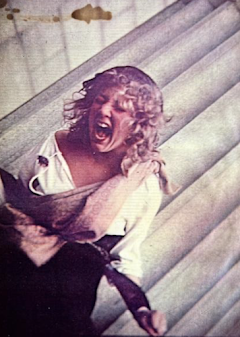 0 honest people having a think
Labels: All misunderstandings are my own, learned things 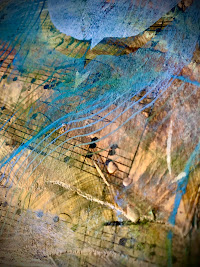 Meraki - A word describing doing something with soul, creativity, or love -- when you put something of yourself into what you're doing, whatever it may be.

That whatever-it-may-be comes in infinite packages, everyone has one - Mine is building Meraki Issues + dispatching them to my dear patrons.

Each quarterly perzine is a deep blend on an overall theme. It’s also a challenging project that keeps me honest + on the rails.

From my seat, collecting images, mistakes, drafting prose + confessions have always been an important part of what encompasses my studio work. This is the nitty gritty process stuff that may never see the light of day, never hit the gallery, or even become full blown finished. Some ideas are really never meant to leave the studio, don’t you agree? But I believe all the bits deserve a way out. The zine form accommodates.

A huge shout out to current patrons who make these issues possible.

Thank you for your supporting of art work at hand + my work in particular.

To join others who receive Meraki Issues quarterly,

check into Patreon to see how. 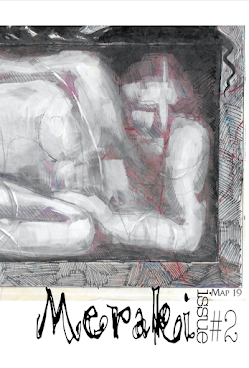 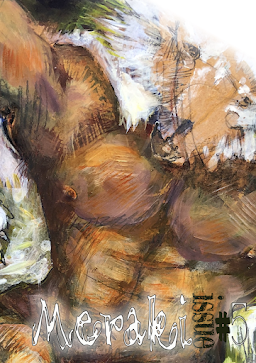 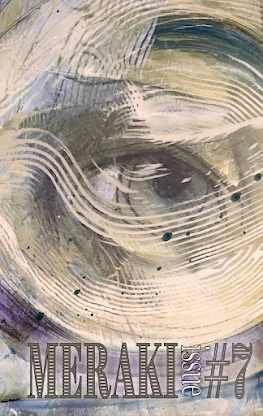 Overhearing someone editing a photo on a device … Can you imagine? In the ‘70s -  when you just had to take a good shot?

… and in a fabric store hearing someone talking excitedly about a project. It’s nice to hear someone genuinely thrilled to be sewing.

Life travels along side us and is usually pushing or pulling. The least we can do is stride along - isn't that enough?

I sent a text message that did not get my drift and returned spelling option over again and again. I think this is a common plight of folks that can’t get anywhere near the spelling of a word they want to use. I do not like the solution - to only use words you can spell even though it abbreviates your vocabulary.

Splintered dreaming of a library art session. I get there + kb has already started his genius piece from a broken broom + folded trash he found in the street on his way to class. There is an old friend from Germany. I admire the arch that they had just recently reworked - but, is nothing good enough as it is?

Lucid dreaming of appreciating something simply as is.

Thinking of not rethinking schemes to redesign bitterness.

Does this make sense read slowly?

Below; Grounds waiting to become grown up paintings. 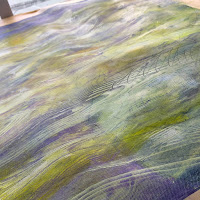 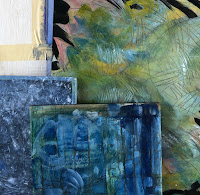 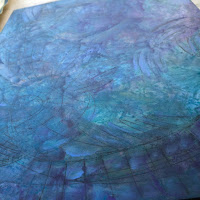 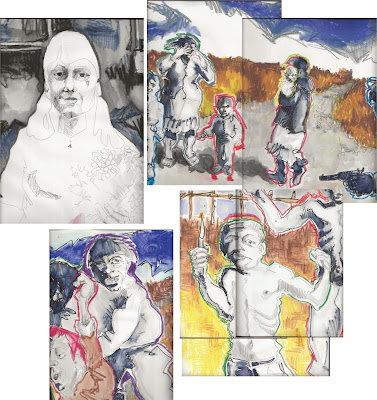 I remember where; I was living in Maine, involved with building a co-housing artist community. And so, I must remember when. The early ‘80s. I  was going through an expressionistic phase and putting auras in drawings. Cartoonish, to be sure. But the work was dead serious. I remembered these - but only found bad detail images of the works on paper. After Koudelka’s impressive photography. It is interesting to figure what was going on when past moments were recorded in your life — as  art is a recording of your life.

I heard today via internet that Danny Kaye is only remembered by his aging audience - something profoundly sad about that, if it is true.

Write about it again … you’re not done with it.

Non-sequitur - write a story of a man flip booking through an encyclopedia or switching the tv from channel to channel.

A trilogy that goes together kicking and screaming.

Someone in the next room trying to get all the attention.

It all seems miles away. 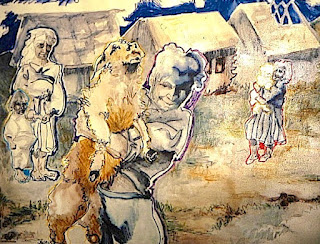 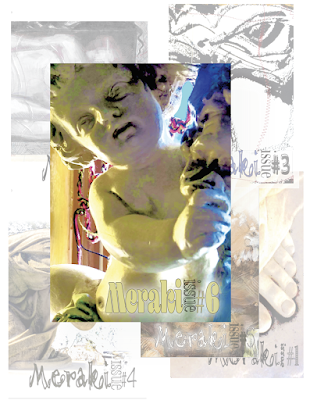 An invitation ....
to join others who receive Meraki Issues quarterly. Meraki is my quarterly perzine that I share with patrons. On the site you’ll also find slices of what’s on the work table, what’s on my mind + what’s down in the watershed …  + the process that pushes it all out on stage.

Have a sit with the Meraki mix to send your mind off on another adventure where the vicarious triggers your own vocabulary of personal memories.

Check into Patreon to see how.

-yours, as forever grateful.

Settled in - but not settling. Winter work contracting —  coming out in spring gets harder and harder each year … and one day it will be unthinkable. I just won’t come back.

I wrote this weeks post over at Patreon. Giving the jump below. I like to write different posts on different sites. Something about setting…

In any case, roll over there if you want to see a middle and an end.

An example of heavyhanded lightheartedness.
Other examples - over there. 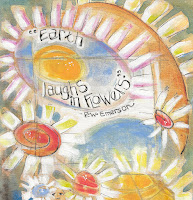 I watched a concert night before before last. It was a great concert. The Utopia band members joined Todd + it was a nice mix of music. It is interesting to hear watershed work. Where there is so much work to pull from it seems overwhelming — the possibilities to pick + choose + rework what you did not get right the first time, what remains relevant + what changing one word will make relevant.

Ah yes! It is bravery when risk is recognized.

The Hanzon Studio studio has used the term Ready-Fire-Aim literally + figuratively over the years. It was placed high up a few decades ago —  one would involuntarily bow to pass under it. In layman’s terms it proclaimed the ability to start before you are altogether ready in order to initiate a beginning.

I am thinking that it is nice not sit with nerves any longer. Nervous  may be in fashion from time to time. It sounded amazing to me years ago, but if you don’t give it too much attention, this nervous thing eventually goes away. Now I wait for that sickly feeling of dread. But the ‘worry’ never comes. I am not jaded, just at ease. What remains is the slow burn of excitement. 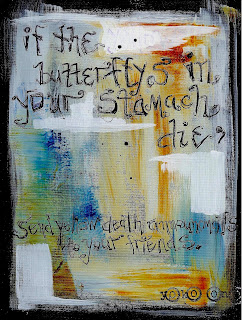 I’m guessing most humans get side tracked by trying to decipher older notes and scribbles meant to be meaningful additions to their personal repertoire.

Expanding knowledge from a cereal box - every morning it’s the next biggest thing.

A lampshade has been put on the dancer this time and the Marley floor has been washed with soda as to warn the audience with tac-tacking steps. Keeping the butts awake in case they do not see the long shadows cast from their own seats.

Itchy trigger fingers not waiting for a queue — aiming only to be noticed.  Not a very good reason to fire.

The evolution of the calendar. What type of personality wakes up in the morning with the thought of changing a calendar - what some people do in the name of science others do just for kicks.

Walking a desolate shore high on a dune. Presently kiosks appears scattered about near the water — creating ritual opportunities. I can see a few tiny folks decorating with bleached paper monarchs they take from bamboo cages.

Others catch up to me and I become a group, then, the converging crowd overtakes me, walking faster toward the origami monarchs as the delicate wings come to life down near the shore  ... The butterflies and ceremony at the waters edge have been supplanted with the masses and my friends presently have woven deep within the sandy mob.

I can almost keep up, but am relishing the view from afar. 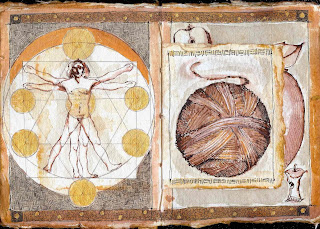 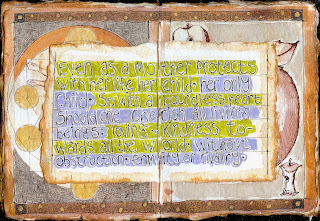 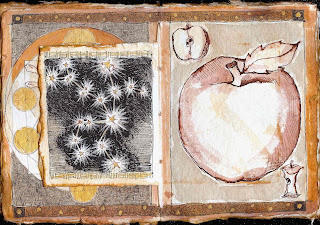