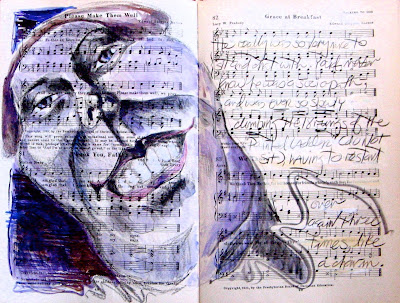 He really was so very nice to sit and chat with. You’d never know he was a sociopath, and was ever so slowly climbing the 18 rungs of the Painted Ladder (do not sit), having to restart over again three times, like a charm.
-from Some of My Best Friends
21 honest people having a think
Labels: 'Some of My Best Friends' 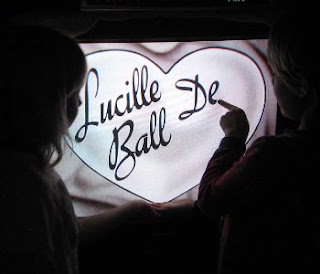 A random memory just flew by.
Years ago I knew a woman selling fabric goods at a hip store named Poppies in Berkeley. She told her roommate at home one night that...
“Geee it was busy, we sold so many notions today!”
“You sell Notions?”
“Yes, we do.”
“Notions.”
“Yea.”
“Wow... you... sell....Notions...’
Obviously he was thinking on the lines of Sometimes a Great...
Yes, It is a burden to carry other people memories.

Okay, so here's what I wanted to say.
Am I the only one who saw the movie Where the Wild Things Are, and turned it into an Ingmar Bergman film? It really was not that big of a jump.

So, I read into things. It’s one of my faults.
It’s not as though I shoot smack.

I introduced the kids to Limelight. Synopsis: A young ballerina is a mess because she can’t get her career started. Cavalero, an aging vaudevillian, is a train wreck because he is at the end of his. Every line seems to have weight to it, reading as Chaplin’s essay on how to live without regrets. It is an autobiographical bittersweet movie spoken in such a lyrical voice.

The kids had seen it three years ago but understood more this time around, and so, got more out of it.
The coming of age as the blooming of metaphoric understanding. The year you realized that the scarecrow, tin man and lion ARE the farm hands. (Sorry if I just blew that for some of you.) It happens to every child and there is a proverbial line drawn at that time.

At the end, and as an aside: Chaplin was awarded an Academy Award for composing the theme from Limelight twenty years later in 1972. The boycott against Chaplin in the US by his right-wing political enemies was so successful that his film never played the required two weeks in a Los Angeles theater to be eligible for consideration at the time of its original release in 1952. But while he was banished, his theme song was not. Even today people who never knew who Chaplin was still recognize its haunting melody.
14 honest people having a think
Labels: ANHH, CMHH, HEROS

For the sake of shedding a bit of light on the numbered plates from
‘Minotaur: There is the Shadow of a Monster on the Front Porch’
I show every now and again...

The Minotaur is used as the device in this work. Mythos’ son is mentally readying himself for the Athenian youths destined on their trek into his home labyrinth to view his art work installation. We find him part victim, part inmate and part monster who will always cast a dark shadow on our psyche - but he is innocent of all these pre judgments. His dreams, hopes and experiments are self chronicled for his light amusement.

Since this is built as a graphic novel, in 37 plates, it stands as it is.
This work will seem less random to some of you. It is stream of consciousness, yes, and some
free-style association, but not haphazard when read strung along, as it should.

11 honest people having a think
Labels: 'Minotaur; there is A shadow of a Monster on the Front Porch 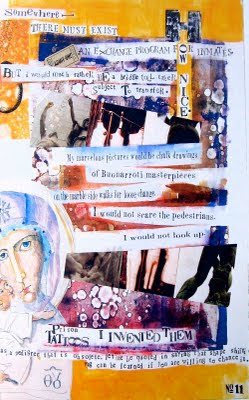 Minotaur plate #11
Somewhere...There must be an exchange program for inmates.
How nice.
But I would much rather be a toll taker subject to transfer.

My marvelous pictures would be chalk drawings of Buonarroti masterpieces on the marble sidewalk for loose change.
I would not scare the pedestrians.
I would not look up.

Prison tattoos - I invented them.
As a pedigree that is obsolete, let me be quoted in saying that shape shifting can be learned if you are willing to chance it.
18 honest people having a think
Labels: 'Minotaur; there is A shadow of a Monster on the Front Porch

Pygmalion quickly unscultped the female nude
that was coming to life... 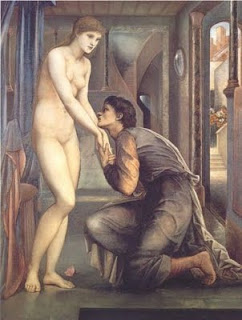 ...what he really needed was a fast horse.
-My apologies to Sir.

From series painted by Sir Edward Coley Burne-Jones.
13 honest people having a think 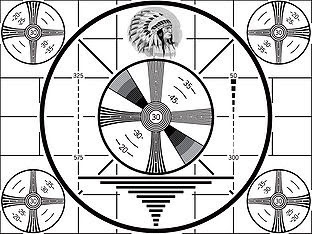 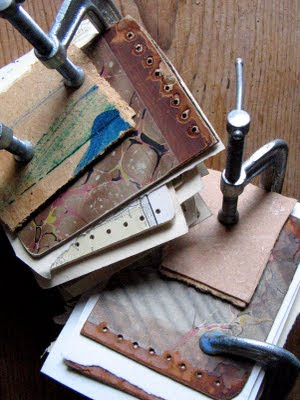 “I’m too impatient to do it right,
but too stubborn not to have it be perfect.” -kb.
22 honest people having a think
Labels: Kyle Bradfield 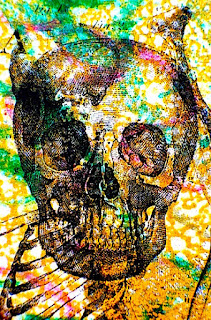 My understanding of being a twelfth house sun sets me adrift near the knowing just enough to be dangerous category. Everyday occurrences can become much too much to process. There is a constant need to disappear. Fortunately, my dearest friends accept my habit of excusing myself from social to-dos to be left to function within my own mental climate. Since I dislike having nothing in common with someone, small talk is not my forté. I do enjoy living vicariously, though, and since one can’t know everything, that must be what friends are for. You may have figured there just may have to be a reason. Maybe not.

I had finally made it, and there was KB, smoking violently and  leaning up against the wall. He saw me coming. Stomping out his cigarette, he rolled his eyes and asked,
“What took you so long?” And we pushed open the pearly gates and entered together.

I am hoping, of course, that the line of questioning is to our general advantage. How much we enable others... not what we gleaned for ourselves. How wonderful a friend we were... not how many we had. How much we gave away... not how much we ended up with.

The good Samaritan makes to-do lists for escapism. When the chances arise be ready for any level of miracle. Leave expensive jewelry at rest stops in impoverished areas. Pay the toll boother one hundred dollars for you and the next ninety-nine cars. Store priceless marble statues in the trunk of a stranger’s car for ballast.

Contemplating on the meaningful takes much longer. I fall asleep wondering if I’ve done all I can do ... The favor is returned with an uncomfortable dream. I am lying on a rug and friends are encircling me taking turns with a talking stick. Passing the token, each verbally digs at what they really think of me. Even in this dream state I knew their reason didn’t rest on bedrock. I still became emotionally stripped. I awoke thinking this dream was so bad it must satisfy one of the prerequisites of the twelve steps.

A friend not only tells the truth, but leaves unsaid the obvious at an opportune moment.
It’s been a day of allegories.
Some better than others.