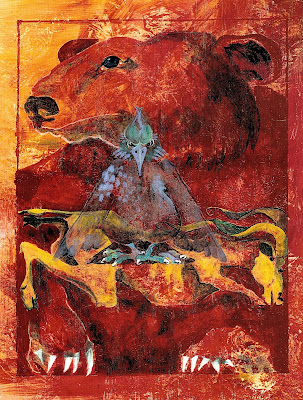 Hibernating with a Deer Spirit
Walking back from the bus stop this morning I could
feel a shift in the air.
Winter Work is coming on.
14 honest people having a think
Labels: picture-making

Action and reaction are equal and opposite. -Gertrude Stein

Choose a subject equal to your abilities; think carefully what your shoulders may refuse, and what they are capable of bearing. -Horace

All men are equal before fish. -Herbert Hoover

William of Occam's Razor
The principle states that one should not make more assumptions than the minimum needed.
=
One should not increase, beyond what is necessary, the number of entities required to explain anything.
=
All things being equal the simplest solution if often right.


...I would have to add that all of the religions today
seem archaic and dangerous. -Joey
X
Drew would have to say,
I don't think god is in heaven anymore,
that was a long time ago.
=
A quandary.
13 honest people having a think
Labels: ANHH, Campbell, Theme

Just dusting off the unfinished manuscript from the collaborative piece, with Hanzon, on the cross-training dictionary.
I’ve not posted any in a long while and thought I would break this silence with a few more of our simple revelations: (or not.)

2. There exists in everything the potential of transformation.

The marble not yet carved can hold the form of every thought the greatest artist has. -Michelangelo

3. Try to know if that was the easy part or the hard part.

4. If something is not changing you are not looking close enough.

5. Muse: Learn to work this. Most successful freelancers can't afford to wait for inspiration. People in other professions work everyday whether they feel like it or not.

7. Use gravity to you own advantage.

8. In a proposal I like to always throw in something terribly wrong ... just to see if they are watching.

10. Edentulous; Without teeth. I just really like this word.

11. Dynamic Change; Change that happens positively, immediately and, is not irreversible.

12. Great creative works are hard work and not simple. Move towards a true quiet profound excitement, and, being in this slipstream of the creative flux is indeed our element of trusting the outcome.
11 honest people having a think
Labels: Lonnie Hanzon, x-train/codices

A semiretired backdrop tool, that has been to the paintbrush hospital way too many times.


76 ... In Hong Kong workers mopped up behind us with the reek of benzene as though we were stinky Americans. There was an amazing lack of unemployed citizens and dirty smells. Early morning in front of the work place we’d notice men on their knees scrubbing the white lines on the street using acetone and a toothbrush.
Describing the aroma inside the elevator left us competing for superlatives. This bouquet of sweaty chrome landed somewhere between spicy incense and unpopular feral swine. ...

Happy TT ... I'm back for the moment.
28 honest people having a think
Labels: 'Script for a Practicing Artist and an Unfinished Life', Theme 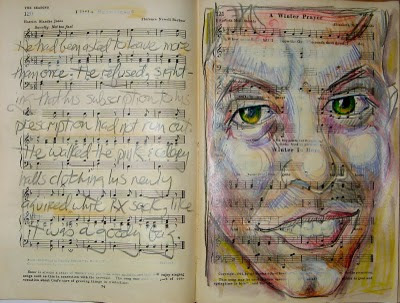 He had been asked to leave more than once.
He refused, citing that his subscription to his prescriptions
had not run out.
He walked the pink and celery halls clutching his newly acquired white RX sack, like it was a goody bag.
8 honest people having a think
Labels: 'Some of My Best Friends' 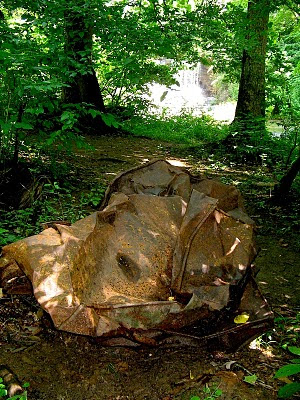 conNOTEative.
This rusted giant crushed can will not be coming home with me.
Here is an example of something I can not make.
I collect things I can not make.
They lie mean-looking, stacked in a wood crate, sometimes disturbed, but mostly waiting to be upcycled.

I do keep thinking about what am I going to be, what am I gonna do? I am once again gaining mental ground by stepping away from it all and saying, okay this is it, I am what I am being. Socks up, continue on. Older ideas drop off, some decision are made for you .... others take time.
Instead of having the mind of ‘this is my lot’ (a lot)... I’m asking, are we all in this too deep to think it was the wrong path? (Perhaps there is a sand bar up ahead.) I am forever trying to redefine my path and concentrate.
The narrowing and deepening of a vision.
But I end up with a wider swath, bumping into the side walls for lack of focus.

I quote LH’s sing-song, that answers the tee shirt ‘I can be what ever you want’

I MAY
I MAY BE
I MAYBE CAN
IMAYBECANBE
16 honest people having a think
Labels: 'Script for a Practicing Artist and an Unfinished Life', Lonnie Hanzon 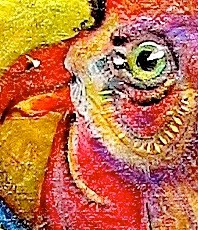 Grew up children feeling the need to earn what the world means to give them.

I wish I had lived in the ‘20s,. Oh hell, who am I kidding, I would have been ostracized then, too.

More from the dictionary...
• lurch; A mental hangout. -e.g. The few members of the questioning committee were left in the lurch when the spokesman had to answer an emergency phone call from his neighbor's dog. also- A scary person.
• process; -23 things to remember
1.
2. Have the right tools or the right people. Anything done without the proper whatever-you-need is the bad timing in a black whole.
3. pick two; Fast, Cheap, or Good.
4. Be aware that absolutes are not true things, but tendencies, and roll with them.
5. Don’t suffer future pain.
6...

This looks like an interesting, hard edged aesthetics kind of day.

I hit on a memory of a slice of conversation.
“They were having a special on eye wear so I bought three pairs for only $100 dollars.”
“But you don’t wear glasses!”
“I know, but it’s fun to accessorize.”

I base my fashion taste on what doesn't itch. -Gilda Radner

We all remain at large.
9 honest people having a think
Labels: picture-making, x-train/codices 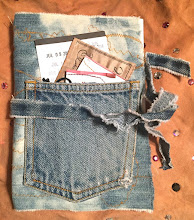