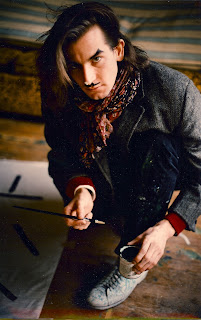 Three made the mod squad.
When I’m on deadline, different thoughts surface, some adjusting into clear memories, others sift away and only an anxious feeling remains. Just shots of memories. Standing at a stoplight on a certain corner as a car speeds by and a passenger yells out the window to you. I’m thinking everyone has this experience of ‘hits’ when the mind is occupied in one area or another. It’s Joan Baez that sings about memories tumbling like sweets from a jar.
I had thought to put in different names, but this was so very long ago, kind of. And although this may not make since to you, it’s just how the mind works, yes?
Our friend Dana joined in our artistic carousing. He wanted to be a writer so I reckon he felt no competition from us. We loved him because he was quirky (who were we to say), he wore gardening gloves in the winter, brought strange and stranger women home to stay over night and lived to be a character in the movie  Chariots of Fire.
Dana fired off odd one liners,
“Jayne, of all your faults, malicey is not one of them.”
We rehearsed non-existing movies in the subway at rush hour.
Once, we scaled a fifteen foot cyclone fence at dusk to walk across a barricaded rickety scaffold high above careening traffic. Actually, once was enough.
We had spontaneous photo shoots on the roof top. On one occasion Kyle dressed Dana as a messiah in a lamé diaper. It was cold. Dana was really cold. I wanted  him to wear double stick tape on his tattered sandals so that he’d pick up and drag leaves, dirt and small sticks. I thought for some reason it would make the image authentic, as though that was important.
Labels: 'Script for a Practicing Artist and an Unfinished Life', Kyle Bradfield