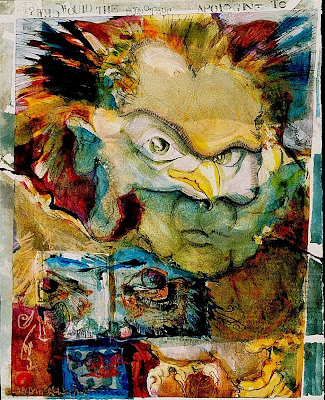 Who would the Minotaur Apologize to?

This is an memory circa '90 put down in ...
Script for a Practicing Artist and an Unfinished Life.
I read this thinking how judgemental it was, which isn't really me.
Add too, I am fairly skittish, and scare easily.
But I wonder, now, what was really going on then.

You could live at the Vulcan for a long while, then all of a sudden someone you’d never seen nor want to meet would surface. A friend of a friend wanted to introduce us to someone's painting work. I believe a false word had got around that had lots of work for all that asked. Little did they know. And little did they know how picky we were about who we worked with. Always eager to cheer on someone’s work I walked by Lonnie’s side to the other end of the complex with an open heart and mind. We entered through the creaking garage door, jumping (with fight or flight) as it slammed closing us in. My thoughts were as murky as my vision. Eyes adjusted, I looked into the cavernous studio set up like an art show. We walked past the art with wide eyed poker faces. The work was colorless, abstract, without the expressionism.
When the dreaded artist pointed saying, “The good stuff is in here.”

I mouthed words to Lonnie, ‘I’m not going in there!’ He rolled his eyes to let me know this too will pass so lets get it over with sooner than later. We walked into the artist’s private chamber like we were doomed. And, as it turned out, we had good reason.
Sometimes I suspect we were all left here to unravel each other.
As art is subjective, and this fellow is probably a celeb now.

It has become a standard joke between us that when you start talking about the size of a piece of artwork, you don’t think highly of it. If the best compliment you can come up with is ‘that's a great size for a poster’ then you must think the work isn’t worth looking at any closer. Just too scary.

When the scene is a Victorian mansion, you should know it’s going to be a horror movie.
I tend to carry that backdrop around in my head so it’s accessible at appropriate moments.
Labels: 'Script for a Practicing Artist and an Unfinished Life', Lonnie Hanzon, picture-making