I felt the fall, but not the flip-flop: I landed on my feet. No, I reminded myself, you still cannot move your legs. 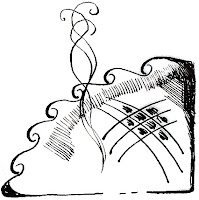 I am busy, at this moment, plastering exploded drawings onto a wall with watery glue using a large brush. Everything from red wagon instructions to metal stairways to a toilet to scales to guns to an oscillogragh to; trusting you get the linear  picture. I keep backing away including more of the wall onto my peripheral vision. I was unsure if I needed the information or I was leaving it for posterity. Because chalk lines don’t last. This plastering a new layer of instructional material would never end., I seemed only  to hold the torch for the moment. I was in the golden glow of Vesuvio’s bathroom in North Beach. A familiar place, where hopes dangle from thin string, a slow-spinning redemption, winding in and winding out. There are many voices on the other side of the door. I am captiv/aided into a reverie.

The door opened wide and I bolt with a question, “What will you have?”
“I won’t drink.”
“Obviously you do, what will you have?”
The bar-back was so thin I heard some one out there say she could be used as a weapon. I looked past the tender to the images on the walls. The glass coverings were chipped in the corner and smeared with lipstick and grime. The fingery haze of smoke began to tighten my throat.
“I’ll have sky-pie.”
A slice was handed to me as the heavily anise lased aroma hit between the eyes. I took a bite and mentally backed away from the intensity as my mouth went numb with the intense flavor.
Arguments ebb and flow in a chaotic mess. I wanted to yell that the bat was on his way, even through the cacophony was too loud to have been effective. For sure, he and I had never been seen in the same room … kinda use to make ‘em wonder … but I could no longer play that card since the Batman died. Insults were flung in my direction. If that where true I’d have to say, it’s none of your business, but since it isn’t, I’ll just say you’re on your own.  I mentally wrote the abuse down to use later, but I have never been good at the memory game.  Then I was hit by something exposing deep secrets.