He held the winged doll in his arms cradling it as he swayed back and forth imaging the life it represented.
Squinting into the sun he thought of the disadvantage of sword fighting against the light with the opponent in silhouette. He moved toward the surf and knelt down dragging the figure onto the sand. The silk brocade fabric wicked up the salt water splaying it in a meander following the woven pattern upwards to the collar. The darkening of the form interested him and he studied it with intent, not hearing the small girl child come up and plop beside him with familiarity, the obvious question asking on her face.
He silently cursed his inability to defend and responded begrudgingly,
“Just playing at magic.”
Her look remained unimpressed so he continued,
“This is a do-it-to-it doll. Somewhere it’s happening to another real live dragon. And I’M doing it.”
He made a jab to his chest with a thumb extended from a fist.
He realized having said so the idea relied on a leap of imagination. Glancing at her sideways and seeing her charmed, he eased and had a try at being humble.
“And that makes me St. George. The magic dragon slayer. "
A soft mist encircled the early morning moon as it rose from between the sugar trees. The reflective spotlight quickly embraced all that lay in its wake as if tardy and making up for the mistake.
“Merry we meet.”
She lit a white candle on the stone altar and stepped into the circle.
It was then she felt a dragging motion as if water deadened her limbs and crawled to her neck, holding her firm as if the strangling would be slow over a period of days. At once she became aware of the necklace she had worn since her fifteen birthday. It had become a tight reminder of old songs and past chapters; all hard won to be neatly forgotten.
This convincing had the young girl emptying her pockets of the tools and findings of the day. With the look of someone having to pick out of retribution and with great ceremony he moved his hand over the collection as if sensing energy. With disenchanted enthusiasm his hand hovered over the spilling of broken Coquina, an entire twirl of tangerine peel, a bit of string, a tangle of monofilament, a barbed fishhook and broken stick. He scooped up the fish line and held it out to her.
“Let out the knots and I’ll show you.”
She struggled with that task as he easily fashioned two spears from the stick and shell with the string. He pierced his finger in testing the weapon's worth and raised an eyebrow in expectation of her compliment. She gave up the de-knotting, noting it a ruse to keep her occupied.  She traced his glance to his bloody finger then back to his eyes.
“Yuck.”
She immediately regretted it. Having gained tribal trust, his smirk now seemed to tell her he would simply gross her out with playing at boy torture punishments.  He doubted her, but prided himself on not discriminating upon a person’s gender, as that was to act in ignorance of a deeper truth. He ignored the retort and pushed ahead.
“This is how you kill a frog without really killing it.”
She broke the necklace and tossed it toward the candle, hitting just so, making it sputter then reignite bolder. This became a sign, a chance to reunite with the inner plane. She wanted to burn clean and begin again from the supernatural that is naturally potential.
Walking the perimeter of the circle, she made a safe countenance against the spears of invading authoritarian hierarchy.
The young girl modestly withdrew her body, as she craned her neck toward the experiment for a better look.
Not wanting her to help further, he positioned the dragon between his feet and held fast as he readied the implements of despair. Ignoring the rules of the blood-circle, he challenged the air between himself and the fire breathing dragon foe of medieval legend. With a burst of adrenalin and a spear in each hand he forced the spears into the head of the doll meeting up through the center scale.
She gazed up toward the moon and saw an apparition winging toward her. An ecstatic ride held her in a trance and whispered vaguely in a language she had yet to understand. Two eagles crashed inside her head, exploding in a light unbearably brilliant and the electrical resonance left sparks scattering throughout her being. She tore at her hair until the divine ecstasy eased. Centering herself as the ancient Omphalos, she moved out from there not looking back.
With a bend and a twist he released the victim from the spears.
The dragon lay disfigured, an interpretation of death.
-30- 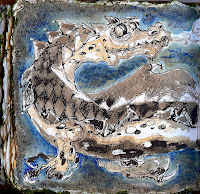 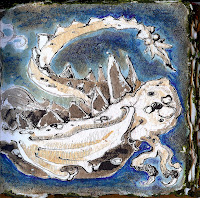