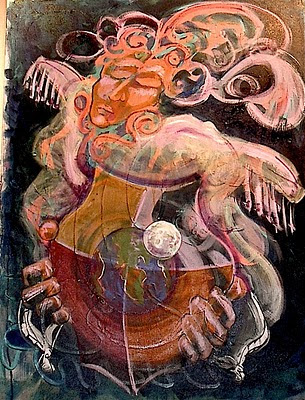 I am not worried. I am not overly concerned.
The rock paper scissor gods get their way in taking turns at playing umpire.
A great equalizer of a game, however, you must adhere to the rules.
At times it seems obvious where they are betting. The cliché of a sword in hand forming the gaming board in the sky. The fickle hand swerving, the blade’s edge pointing downward, directing the luck we tremble to witness. Every province is in the queuing with a future moment to be reckoned with.
Them, us, Chad or one of the Stan countries.
No one has been missed. No one will be excused.
Who has not their hand in conveying the future?
I am not worried. I am not overly concerned.
Sensationalize as a commodity. Who needs a fortuneteller without a performance to look forward to? The dull-witted ever needs direction in matter of tangents and direction to give shape to drama.
He remained in the soapbox position tolerating and persuading the passers by to see along with him the forerunners and warnings and to interpret the signs that were so very obvious to him. Causes are assigned through the movement of the sky, the direction of the wind, and placement of fallen leaves. That’s why it happened. This is what will happen now. The crier carried ideas with the seriousness some caught, others could not. These ordinary influences made the common person apprehensive of calamity, doom, and a wasted Akeldama ahead. By using the power of suggestion the foretelling comes about.
Have you ever had the experience when someone is being obviously rude, and when you point it out to him or her; they become twice as rude being angry that you noticed they are being rude?
I am not worried. I am not overly concerned.
It is difficult for me to mimic. If it is not felt, it is not played out.
Having a think on  A journal of a Plague Year  by Daniel Defoe.
Research reading for a play … not a fun read … but engrossing.
Above: 100 Paintings in 100 Hours / Hazon / HarHar  / counting crows
Labels: 10thDOM, Lonnie Hanzon