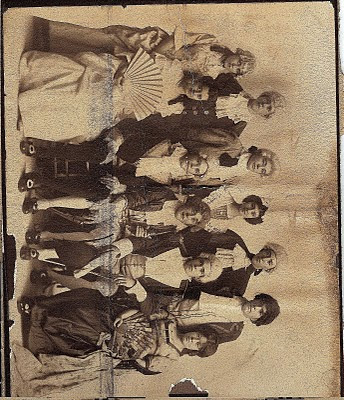 I would normally look over a photo of this genré because of the alarmingly noticeable, because of its vacuous absence, of a back drop.
Pirate of Penzance, to be a L. Laughn production dates 1911.
Unfortunately the names in copperplate handwriting is too faded to decipher.

Hopefully thee players look more natural with stage makeup on and in the moment.
There is a certain air to the young man, third standing, that took care in his sans-wing line good looks, and the gentleman front and center looks alarming casual with his gun pointed up at his left ear...

Of course there is the annoyance of this photo being sideways in the frame... trying, I could not correct it. But I thought Alan, and his friends, at Sepia Saturday wouldn't mind. (?)