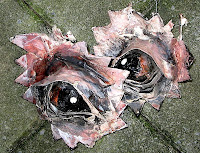 These are the eyes of a maché Minotaur mask.
This is all that is left.

Thoughts have been too wiley to capture. I need a larger net.
Here are a few of the smaller ones that fell for the booby trap.

I no longer assume.
(not just an interesting idea)

In this dream, I am driving in traffic. I climb in the back seat to get a better view of what just went past, a wider view of what is going on. In back I can neither steer nor break, I’m totally out of control. …  and …  everything is okay, it works out on its own just fine.
The mind is so very loud when it is silent.

Using a needle with an eye as big as a camel.

I like the metaphor Ship of Fools. I like the real life objective of singling out individuals that are less desirable, and give them the honor of a one-way ticket out of the harbor. They’d land on another shore … where eventually they be rounded up again to embark on another voyage somewhere else. Those must have been the most interesting of happenings.